I made the 90 kilometer drive on a windy road from Castelsardo to Palau, which is quite frightening, particularly at night when it’s pitch black, and the only lights come from the fireflies and the moon. However, for just one scoop of Fiore di Maggio gelato the trip is worth the effort. 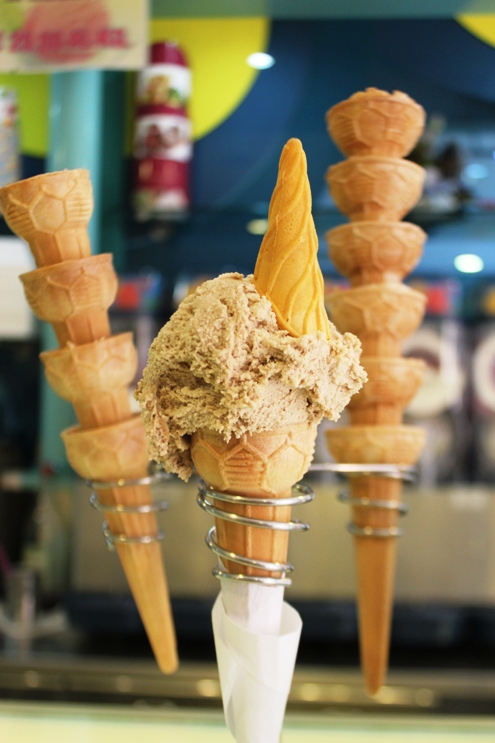 Just like a pizza, pastry or plate of food, one doesn’t have to try to know when they find something special.

Is it thick, dense and fluffy or is it scattered and are there pieces of ice on the edges? The temperature needs to be just right, thick, but tender, not hard from ice or soft from melting.

When I walk into the gelateria at the top of the hill in Palau, a tiny, expensive village near the legendary Costa Smeralda, a chirpy, welcoming woman with a full head of curly, red hair greets me with a smile.

Rossella Pisciottu, owner of Fiore di Maggio, has been making gelato for 18 years, and she’s confident her customers will not be disappointed.

After many years of running the coffee shop ‘Le Due Palme‘ on the port of Palau, she decided to focus exclusively on her passion for gelato. 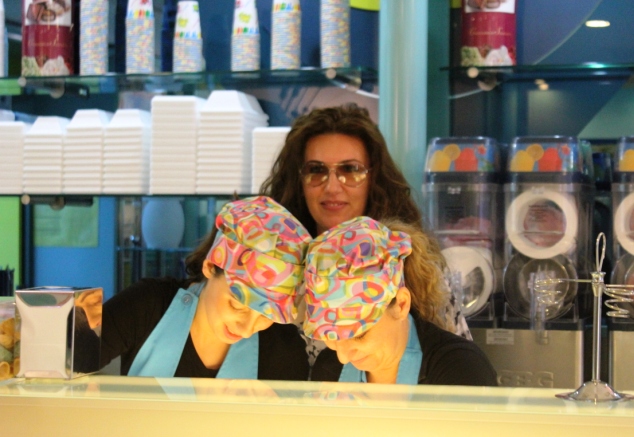 She started taking classes in Padova at ‘Artigeniale‘ (a pun on the word ‘hand crafted’ that in Italian means ‘hand genius’) and found herself on a 6 day cruise in the Mediterranean Sea organized by the master gelato chef Pino Scaringella, who revealed to her and all the other fellow aspiring ‘gelatai’, the secrets of this beloved chilled dessert.

In 2004 when she opened the gelateria with her family, Rossella knew exactly what to do. 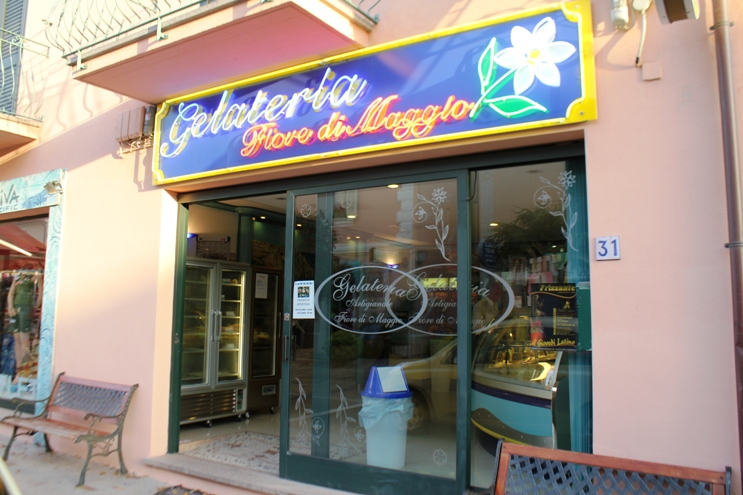 Before I even try the first sample, my eyes are overwhelmed, and the pleasure begins. The gelato is not hidden or flat, but swirled in symmetrical circular pieces that look as if they were cloud-like waves. Had the glass window not been there, I would have been compelled to cup my hand and run it through the gelato, just to enjoy the sensation of the consistency on my hands. 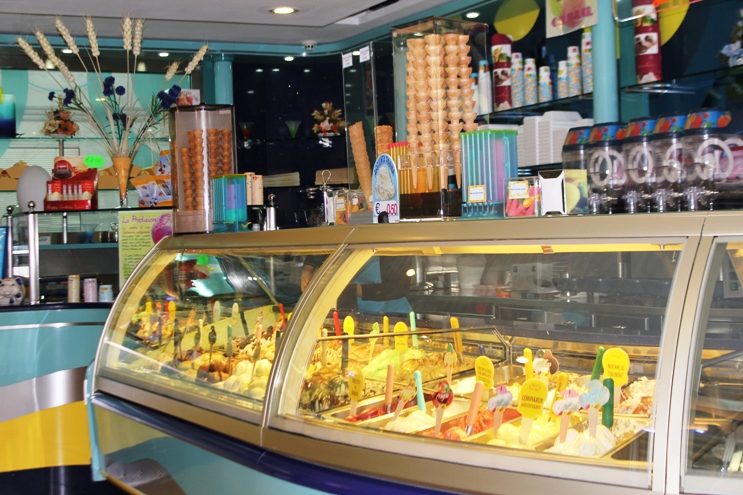 “I obviously have to try this,” I murmur staring at the ‘Nocciolina Americana‘ (peanut). “But also this ‘Noce‘ (walnut), with life size nuts piled on top the display looks incredible”. “And the ‘Jamacian Brittle‘… and no, I can’t miss the ‘Yogurt and Fico‘.” The only solution, I decide, is obvious. Try everything! After driving this far and hearing such great things about this place being one of the best gelaterias of the country, I am committed. 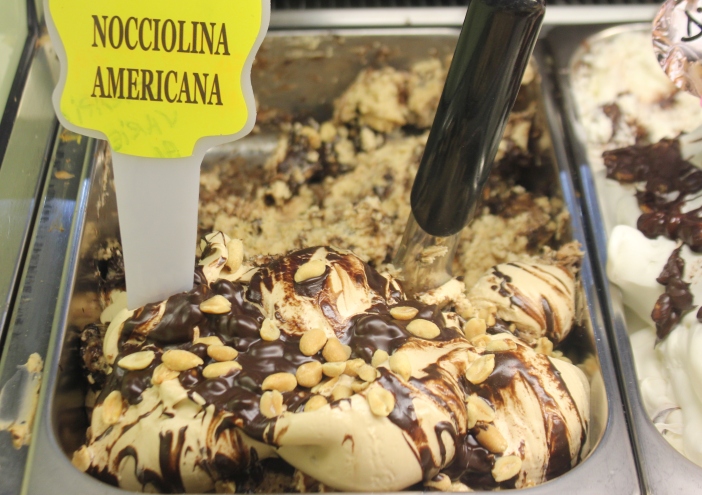 My first selection confirms the rumors. ‘Nocciolina Americana’, a peanut base with salted peanuts and melted Gianduiotto Chocolate (a famous Piedmont hazelnut chocolate made with 70% cacao) is one of the best flavors I’ve tried. It’s extremely dense and infected with toppings, so much that sometimes I’m searching for gelato to eat with the chunks of fillings. The ‘Noce‘, equally thick and intense, is filled with a bursting, authentic walnut flavor. It could only be better if the pieces were a bit bigger so I could savor the crunch of them in my mouth. 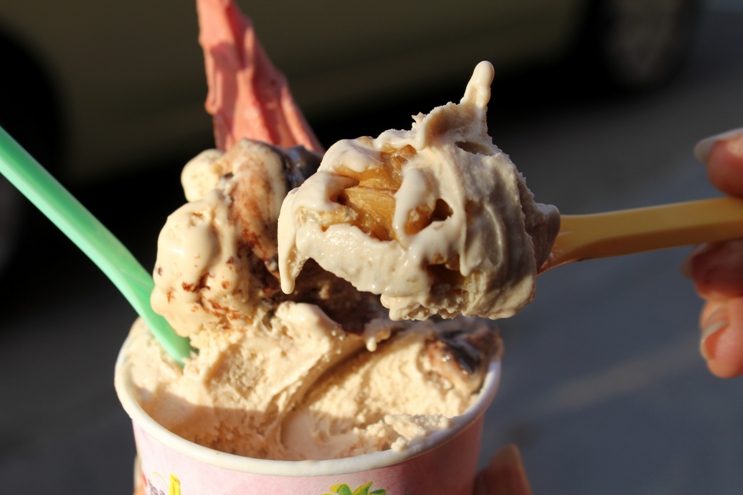 Still, I am not satisfied. Not because the gelato is not exceptional, but because it’s so good, so fulfilling that one is left addicted to the sensation. I return for seconds. A cone this time with ‘Liquirizia‘ and ‘Yogurt al Fico‘. I’m not a licorice lover, but one taste of this gelato converts me. Pisciottu’s flavor isn’t like the other ones. With 200 grams of pure ground licorice (a hard candy made by boiling liquorice root and subsequently evaporating most of the water) per 4 kilos of base, the gelato is one of the strongest I’ve tried. It’s loaded with flavor; a perfect combination between the intensity of the candy and the creaminess of the base.” 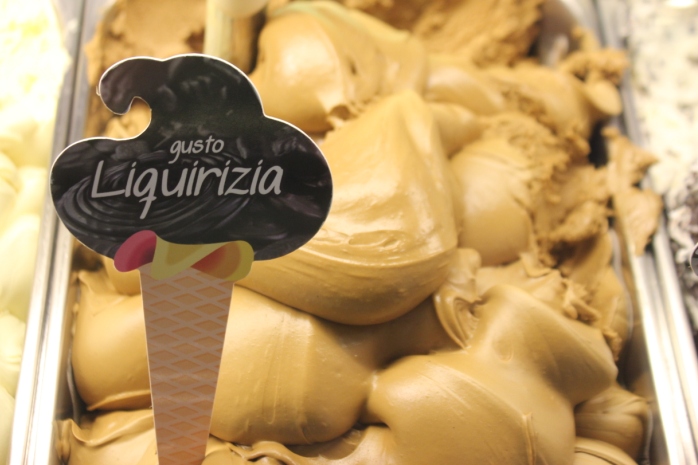 When I ask Rosella about her favorite, she points at her ‘Yogurt and Fico Carmellato‘. For her, it’s more than the gelato, it’s sentimental. The fig jam used in the ice cream is made by her father. The naturally tart hint of the yogurt and the sweetness of the cooked figs create a spectacular balance. 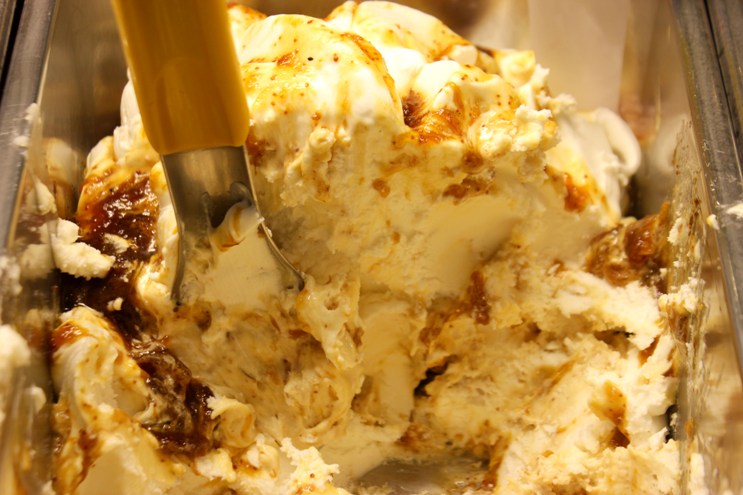 Before moving on the next tasting round, I chat with Rossella. “The process of making gelato is a science – she explains -. Each flavor is a new equation. It has to coexist in the same display case, at the same temperature of all the other ones that require different balances of ingredients in order to harmonize the freezing temperature. When you store the flavors, each with different compositions, in the same place at the same temperature, it’s important that they maintain the same consistency. That’s where things become difficult. When it comes down to it, it’s really like chemistry.” 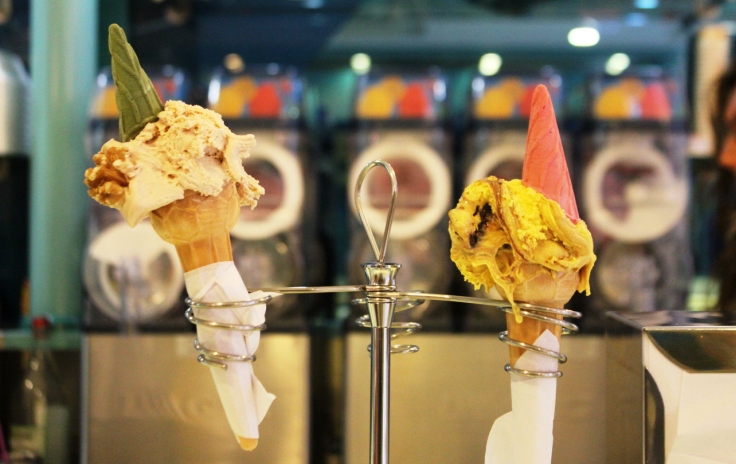 When my thirst for knowledge is sated, my craving for gelato is not. I indulge in a third cone. The ‘Croccantino Jamaciano‘ that Rossella recommends me is an eggnog base with rum, chocolate and caramelized hazelnut pieces. It’s intoxicating, and the intense rum flavor has me drunk with flavor. ‘Fondente’ is made with 70% dark chocolate and water (which explains the intensity) and no milk. 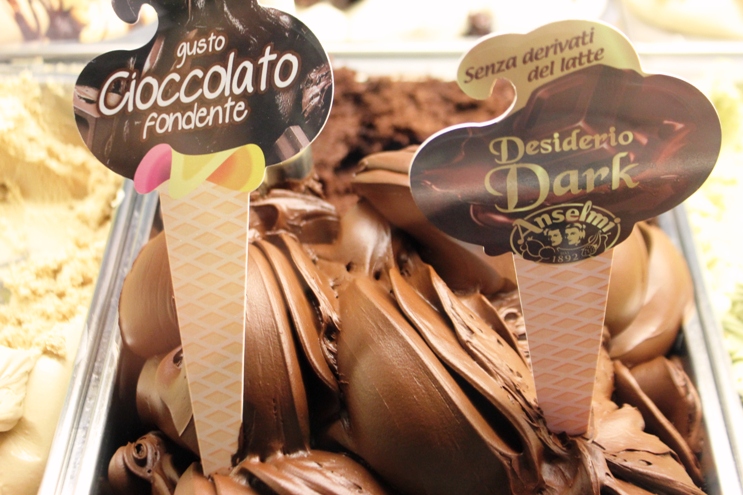 ‘Espresso‘ too is unique: while normal ice cream makers use pre ground coffee, Rosella uses actual espresso cups and she sprinkles coffee grounds on top afterwards. That’s the reason why the flavor is extra strong and bitter. 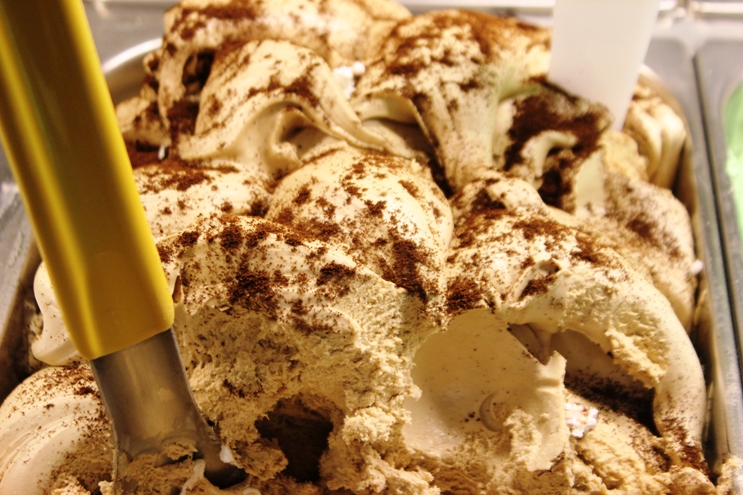 It’s not until I try something truly spectacular that I remember the child-like satisfaction that makes ice cream the best dessert in the world. The pleasure of endurance from finally reaching the cone and taking that first sweet bite. The silence that ensues after your first bite, relishing the perfect sweetness and balance of flavors. The compulsive smile that radiates across your face when you are licking the last of the scoop on top. The lament when the ice cream is finished, and you are licking your fingers from the melted drops just to savor every last bite. 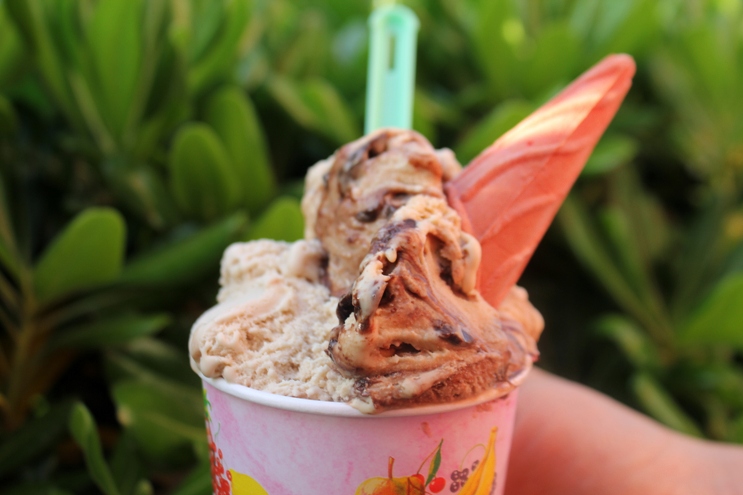 Fiore di Maggio provides all these emotions. The only regret comes when you leave, knowing that you will have to sift through another fifty gelaterias just to find one as excellent as this, and that 90 kilometer drive won’t sound too far when you know what’s waiting at the end.

It would have been better if… I had gotten a fourth cone. 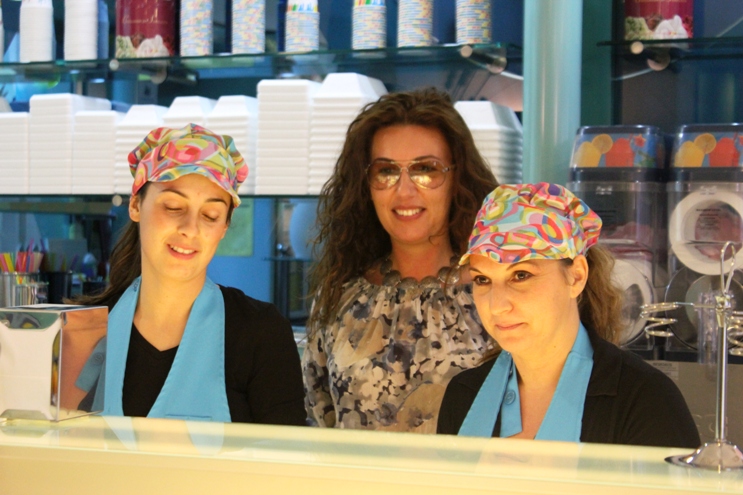