If I think back to the moment when it all changed, where I realized that gelato was more than just ice cream, but a passion, a work of art, it was when I tried ‘Mandorla‘. It was nearly a year ago in May of 2011, when I first savored that legendary bite. 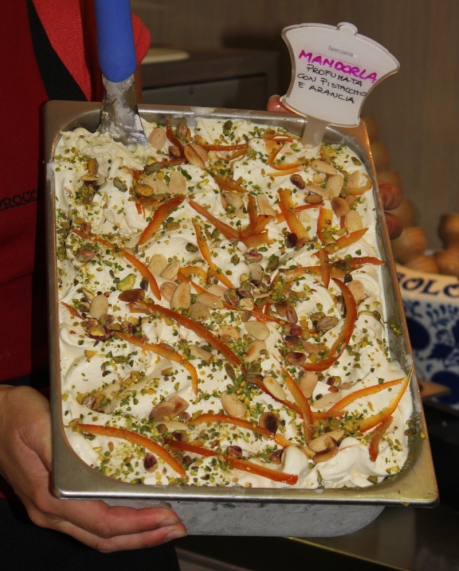 The memory, the pleasure, still vibrant in my mind. The gelato base itself was simple, yet divine, and careful not to take away from the pureness of flavor. The lightly toasted almonds, despite being consumed in gelato, were still warm. A mystery.

The pistachios were salty, fresh and retained every last morsel of crunch. Heavenly. The candied oranges, sweet and tangy, added zest to the creation. Electrifying.

Separate they are unsettling, like a single note on a piano, but together, a harmonious chord. A symphony. 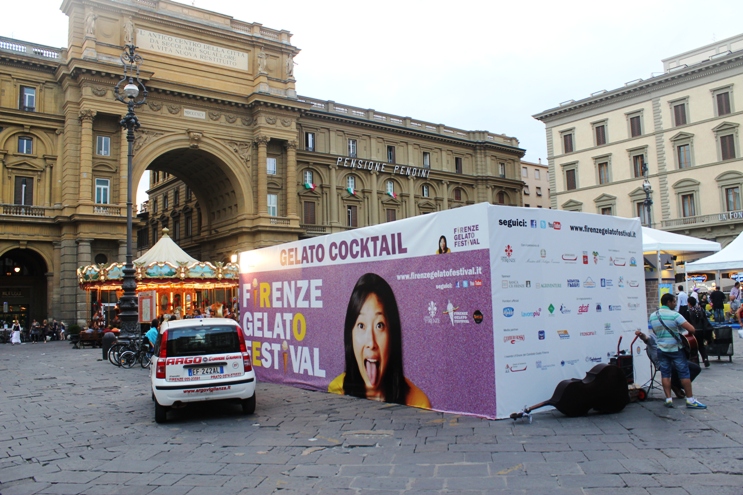 Giampaolo, who runs the gelateria with his wife Barbara and her dad Piero, was there to ensure the stand was ran smoothly. A tall, heartfelt, affable man, he lives nearby with his wife and kid. On any given day, you can find him in his gelateria, hand making and serving some of the world’s best ice cream.
The Gelato Festival spans over four days, where ice cream lovers and gelato owners from all over Italy come to enjoy a day of indulgence. The prize for the winner? It’s more than obtaining the title of ‘Italy’s Best Gelato. As one gelato maker told me, ‘it’s about the glory.” 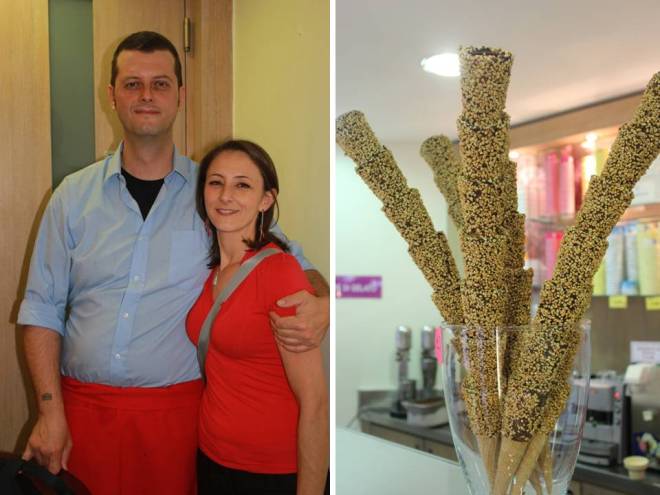 I am not proud to admit that I tried every single gelateria on that memorable Sunday afternoon. But I am confident that after consuming over 30 cups of ice cream and taking a class on how to it, Il Procopio was the only gelateria I returned to for a second scoop. When I came back, Giompaolo was still there.
“I’m glad you like it,” he told me. “Like it? This may be the best gelato I’ve ever had. You have my vote.”
I returned to Florence several days later. The first place I went was Il Procopio. While I was there, sampling the countless heavenly concoctions, I caught up with Giampaolo, who was still awaiting the news of the festival. He didn’t seem phased. “If I win, I win,” he told me. “If not, I still have my place and I can do what I love.” 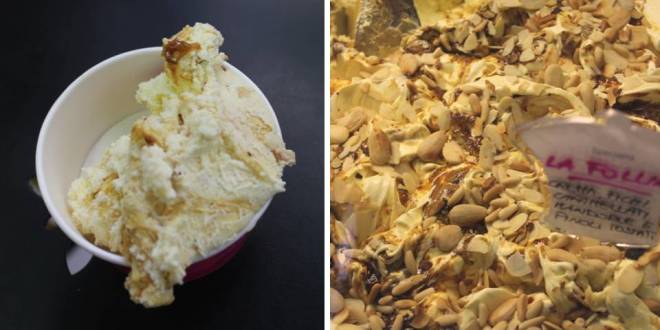 His gelateria is located prominently in the center of Florence. It isn’t hard to find, just look for place with a line out the door and smiling kids whose mouths are covered in chocolate. Inside, the decor are as original as the flavors. The cups, a bright pink, yellow and blue, warm the atmosphere. A flamboyant display of chocolate and hazelnut covered cones emerge from the case like an overgrown bush. Even the handles which serve the ice cream, a blue and yellow mixture, add to the velvety colors. “Gelato begins with your eyes,” one gelato maker told me. At Il Procopio, the arousal starts before the eating. 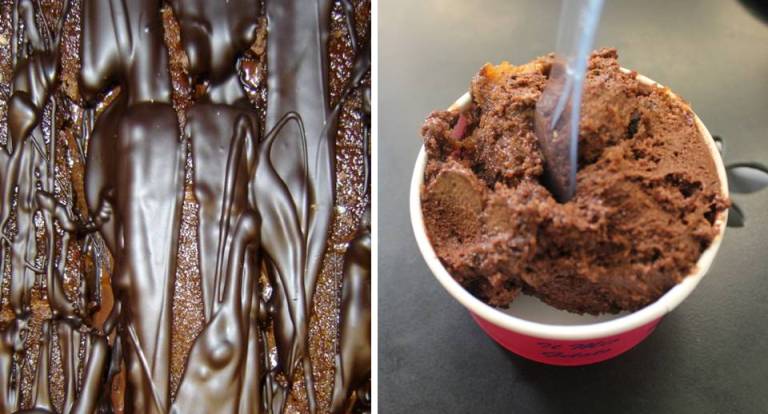 The infamous Mandorla isn’t the only extravagant flavor which Giompaolo has created. La Follia, a cream base with figs, almonds, cinnamon and roasted pine nuts looks more like a cake than a gelato. The toppings are so plentiful that every bite is crunchy and fresh, a true eruption of flavors.

The Torta Sacher, a famous German cake that he recreated with chocolate and apricot jam is rich and decadent. The Chantilly with appple and cinnamon, is as original and innovative as it is blissful and sweet. For those who crave a Sicilian flair they also make granitas, a variation made by freezing the ingredients and then shaving it to eat the ice. Each creation, an ingenious  demonstration of their flair and creativity. 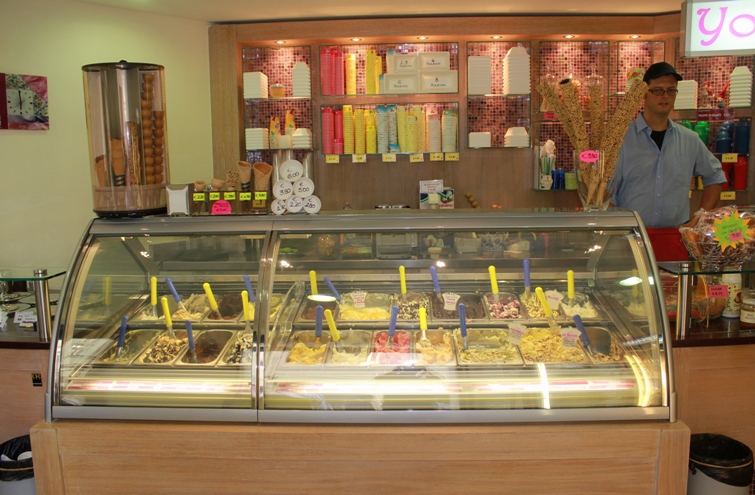 A few weeks later, I was pleased to find that Il Procopio won the prize for ‘Best Gelateria in 2011.’ It was only as I expected. If they hadn’t, I would have been concerned with the opinion of my fellow voters.

It is now time for the 2012 Gelato Festival and I have made plans to return. As one avid gelato lover put it when I asked her if she was attending, ”I wouldn’t miss it for all the gold in the world.” If Giampaolo will be there again, with a new flavor that rivals his ‘Mandorla’, then neither will I. 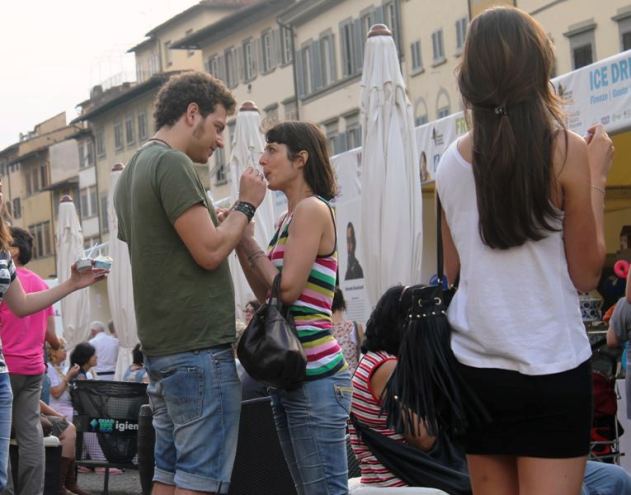